Transfer News: Liverpool keen on signing a 22-year-old to replace Mane; Man Utd have made a bid of €105m - CoolBaze.com

It is already known that the ‘Merseyside’ Liverpool are interested in signing Benfica striker Darwin Nunez, Paul Joyce has stated that the club will not engage in a bidding battle for him.

There’s already speculations that Sadio Mane is exiting Liverpool this summer and Bayern Munich seems to be a likely destination for the Senegalese star.

According to reliable journalist Paul Joyce’s, Liverpool has already turned down a bid from Bayern Munich worth £21 million plus £4 million in add-ons. 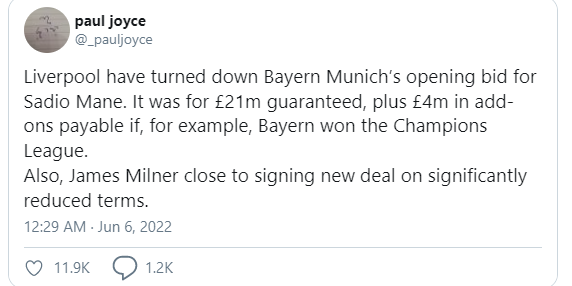 Joyce reported right before the Mane update that Liverpool’s interest in Darwin Nunez is accurate, but that they will not countenance a bidding war.

Writing for the Sunday Times, he said: “If they decide to sell, Liverpool would demand a fee sufficient to recruit a suitable replacement.

“There is interest in Benfica’s Darwin Núñez, the Uruguay striker who scored home and away against Jürgen Klopp’s side in the quarter-finals of the Champions League, but Liverpool will not pursue the 22-year-old at any cost.” Even though Anfield is more appealing right now due to Jurgen Klopp’s success with the Reds, Manchester United would win any bidding war versus Liverpool.

Correio de Manha alleges, via the People’s Person, a Manchester United site, that the Red Devils made a bid worth €75 million plus €20 million in bonuses last week.

They also allegedly offered Andreas Pereira to sweeten the bargain.

Nunez is a talented player who has the potential to excel under Jurgen Klopp.

However, he still has a lot of work to do in terms of decision making and link up play.

His finishing cannot be criticised because it is by far his strongest suit.

If he joins Liverpool or Manchester United, I have little doubt that he will compete for the Golden Boot.

But I’m not sure how good he would be at knitting play together at the top of the pitch under pressure.